The original crypto cult gathers in Miami midway through a rollercoaster year.

“What is that? Florida. Glengarry Highlands. Florida. ‘Florida. Bullshit.’ And maybe that’s true; and that’s what I said. But look here—what is this? This is a piece of land. Listen to what I’m going to tell you now…” —Ricky Roma in Glengarry Glen Ross

What if the Bitcoin critics are right, and it’s all just an absolutely epic ponzi scheme? What if the dismissive old lions of bullion and blue-chips—the Peter Schiffs and Warren Buffets—have the cryptocurrency dead to rights, and “digital gold” really is a gigantic turd, one part Amway fraud, one part Dutch tulip-style bubble, about to crush a million dupes who bet the mortgage on it at the peak of the hype cycle in mid-April, just before the massive “correction”?

If so, then Miami is the closest thing to Bitcoin’s spiritual capital. The 50,000 true-believers who attended Bitcoin 2021 last week couldn’t have chosen a better place than the Medicare fraud capital of the universe. For more than a hundred years, the Magic City is where schemers have come to flourish and be admired, even after the reading of their Miranda rights. Built on a million shady real estate investments and outright scams, Miami is the only city in America where a Columbian immigrant with pluck, a bad fake accent and a rented Lamborghini can pry millions from the local elite by posing as a member of the Saudi royal family.

Whatever his son Robert thinks of Bitcoin, last week’s conference left little doubt about one thing: BTC groupies don’t give a shit about the thoughts of anyone associated with the Federal Reserve. The conference grounds outside the Mana Wynwood Convention Center were littered with thousands of worthless Venezuelan bolivar banknotes. They were dumped as a symbol and a warning that all government-issued fiat is inherently inflationary. Eventually, many Bitcoin enthusiasts believe, the mighty dollar is destined to share the same fate as the bolivar and become so much paper swirling in the wind. The answer—the only answer—is to buy Bitcoin and never, ever let go.

“Bitcoin is gonna be the global reserve currency faster than most people realize,” a Phoenix Bitcoiner named Todd told me one day outside the convention center, standing near a Lamborghini being raffled off by Sportsbet.io. “It’s the future of money and there’s nothing anybody can do to stop it.”

If Bitcoin was the superhero last week, Elon Musk was the supervillain. Indeed, it would be hard to think of a hero-to-zero story as dramatic as the flippening of Musk’s reputation in the Bitcoin community and wider crypto-sphere. After helping raise awareness and drive the price to all-time high above $60,000 in April, Musk is now blamed for tanking the price of Bitcoin with bad faith comments about its energy use—comments that may or may not have followed Musk’s sale of Tesla’s coins at a huge profit. When the hacking group Anonymous released a video putting Musk on notice during the second day of the convention, it seemed as if every single person in the convention hall was talking about it.

And what a hall it was. Under a massive banner of a dollar bill next to the words, “Defund Their Power,” Bitcoin babes in micro-dresses and heels hawked everything from novelty Bitcoin merch to blockchain tech “dapps” and support services. There wasn’t much sign of other cryptocurrencies in the main vendor hall, and wearing Ethereum gear might have felt like wearing a Red Sox jersey to a Yankees game. About two minutes after I arrived, a dude threw a roll of toilet paper at me. I didn’t know what was going on until I noticed that the words “shitcoin” was printed on the roll with the logos of non-Bitcoin crypto currencies. For Bitcoin “maxis,” there can only ever be one true coin, one true god. 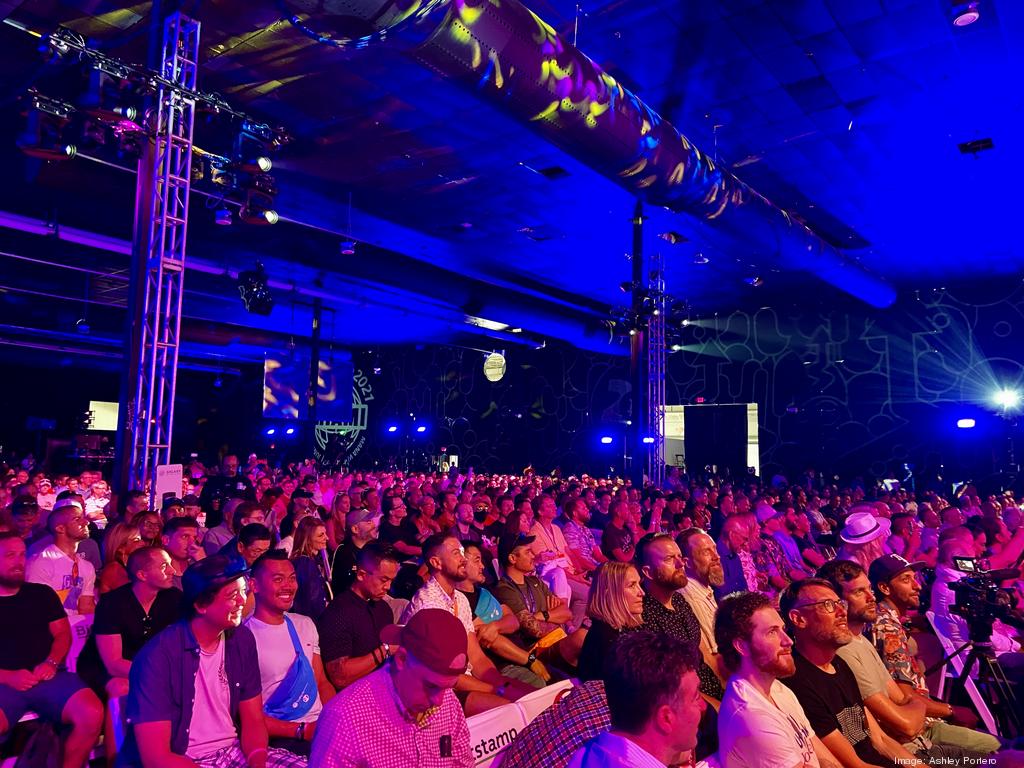 This was reinforced in the Bitcoin art gallery, an anti-Basel of extremely shitty and juvenile fan art.

The closest thing to a viral moment at Bitcoin 2021 was the dramatic entrance by Bitcoin “high priest” Max Keiser, who prowled the main stage before an interview with the Bitcoin bro tech-investor Michael Saylor, screaming, “WE’RE NOT SELLING! FUCK ELON!” When not on stage, Kaiser could be found outside in a white suit performing Bitcoin Baptisms on the faithful who were ready to commit to holding forever, price action be damned. Kaiser’s shtick is mostly that of a comic performance artist, but not everyone at Bitcoin 2021 was in on the joke. A large number of Bitcoin true believers appear to cut the classic profile of the full-on cultist, immune to irony, doubt, and all criticism. Walking the grounds, I overheard dozens of conversations that raised Branch Davidian flags, and spoke to as many more, just to confirm it wasn’t a put-on.

Take Joe, a 60-something Californian baptized by Kaiser who bought his first Bitcoin during the “crypto winter” of 2018. He told me that Bitcoin had literally saved his life, providing him with more than just a hobby and an income stream — it was a “home” that “provided all the answers” he’d been looking for all these years. His t-shirt declared, “It’s Time for Plan ₿”

“I have been down a lot of rabbit holes in my life,” he told me. “I’ve tried a lot of things. When I found Bitcoin, it all came together. Politics, community. This thing is sentient. This community is sentient — it’s bigger than the sum of its parts. It has the potential to rescue the global economy. To save us from ourselves.”

Although Bitcoin is usually discussed as a counter to government power, the biggest news to come out of Bitcoin 2021 was the announcement by El Salvadorian president Nayib Bukele Ortez that Bitcoin would join the dollar as an official currency of the state. (The second biggest story was an announcement by Miami mayor Francis Suarez saying he wanted to make his city a Bitcoin and crypto hub.)

On the other side of the momentum ledger, China and India are still trying to ban the “digital gold.”

Leaving the conference, a disinterested observer would likely be left with more questions than answers. Among them: Why would anybody invest in anything being sold by these people? Does the fate of Bitcoin and crypto generally ride on people like them, or will it be decided by governments and big institutional players who appear to be slowly coming off the sidelines—or are they? And how serious can the thing be if a few tweets by Elon freaking Musk can send hundreds of billions of dollars up in smoke?

Another question worth pondering is, what if it’s all true? Because here’s the thing about Bitcoin Nation: A good number of the Lambos are owned, not rented. Even if Bitcoin is an elaborate Oz-like illusion, it’s an illusion that has made more people grossly rich than Miami beachfront plots ever did. If a scheme, it’s a scheme that has minted thousands, maybe tens of thousands, of little Bernie Madoffs.

At this point, despite the confidence exuded by all sides, nobody really has a clue what will happen. Maybe Bitcoin will take over the world, and maybe it will die and be replaced by a faster, more ecologically friendly protocol. One thing that does appear certain is that the blockchain technology of distributed ledgers is “here to stay.” This technology will have many faces: it might take the form of a triumphant new global currency, while also supporting a lucrative trade in mildly pornographic “non-fungible” collectibles. The day Bitcoin 2021 wrapped, Anthony Weiner announced he was considering making NFTs of his most notorious dick pics.

Come to think of it, if there’s any community that would welcome Weiner with open arms as a born-again believer, it’s the Bitcoiners. Who knows? If he plays his cards right, they might even fund a longshot redemption campaign for the mayor of Miami, official hub for a currency that has found its natural home. Bitcoin and Miami: Faking it and making it at the same time, as one.